Despite the decent enough recommend through someone’s write up on iOverlander about Anita’s Campervan and RV rig campground, set inland in Campeche, we should’ve given it a miss and headed into pastures new. Just 50 kilometres up the road to the nearest coastal town would’ve been wonderful.

Taking it in at Palenque

As a starter for ten, we paid over the odds for a dog-pooped patch of grass crawling with biting ants, where slithers of shade barely enabled us to seek refuge from the fierce sun. And naïvely, I was surprised to hear that we were the first tourists Anita had had in a long time; there was an arbitrary mention of 911 as the probable cause.  The only thing terrorizing anyone was a haze of biting insects, plaguing me while showering in the dark—the light sensor not being overly responsive to movement—wild, merengue or otherwise. 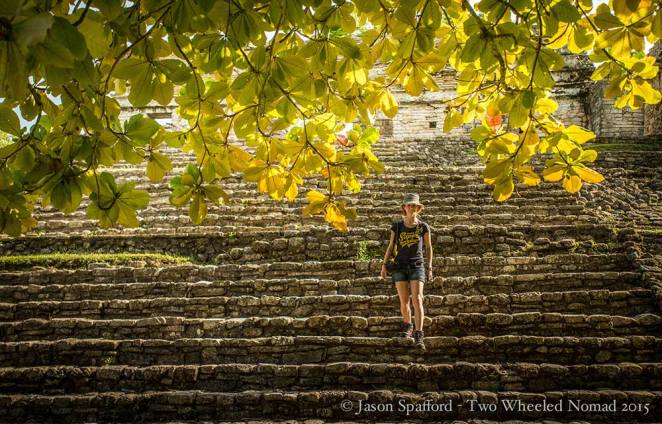 The stunning scenery is superabundant at Palenque

Oh well, the tent was pitched, the pesos had been prematurely shelled out and our pores were in super-sweat eruption. Worst things happen at sea, we’d get over it..! Anita’s nephew happened to drop into conversation about remaining behind locked gates; a vulnerability and an odd tinge of fear entered his voice when he mentioned the crazy folks outside wanting to mug people, and more else besides. Sure thing señor, we’ll stay put and battened down the hatches; the bike covers my mum had made from Ripstop material came into their own making our bikes invisible to all and any unsavoury sundry.

Look at that skull carved in stone

And what possessed us to ‘drop the ball’ so royally? It appeared that the prospect of bartering on the hefty 300 pesos (around £12) for the night—or even abandoning Anita’s front yard altogether—posed a crisis of conscience when I’d have to deal with a dear little lady, at 94 years of age. Remarkable for her tenth decade, Anita had short hair the colour and texture of a teased Brillo pad and wore a long, loose floral dress, not quite hiding a festering sore, 10 millimetres deep by 40 millimetres long that looked viciously intent on never healing. Her weathered brown skin looked like carved walnut, which was also speckled with sunspots. Her face had understandably sagged; it was as though the tissue that had once held it to the bone had grown tired and no longer cared. 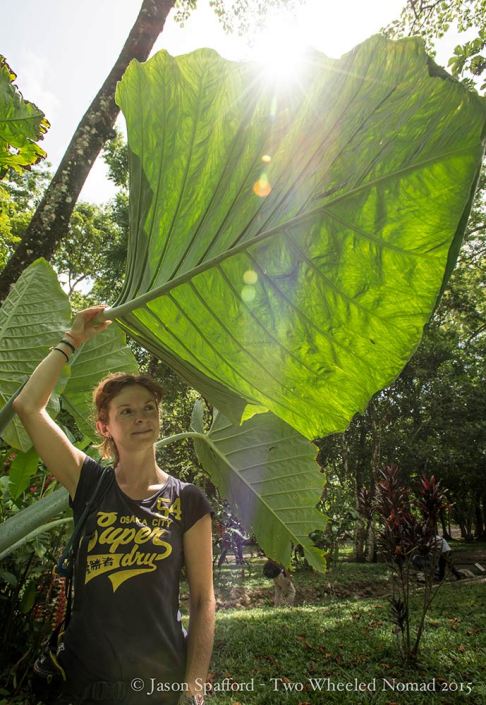 Trying to seek some shade

A frail husk of a woman she may have been although aged as she was, her dark eyes had lost none of the quick wit that had seemingly bedeviled this lady for so long. Without a moment’s hesitation, Anita enquired about our partnership, nostalgically interlacing an opening to reminisce about her late husband with whom she’d lived, worked and loved for so long. “Have you and Jason got a nice completion?” was her favourite question directed at me, with eyes boring a brittle sharpness.

I frowned and recapped the question while scratching my head. “Mmn, I suppose we do, may be some of the time,” I teased with a tone full of doubt. She gave me a glassy look; one of a soul looted clean, a tortured expression. “I’m kidding!” smiling warmly and corrected for the record, “Yes, we have a nice completion, thank you. We’ve been a couple for 15 years now and spend our time together riding motorcycles.” “Oh boy, honey, oh boy! That is lovely, just lovely!” came her overjoyed, squeaky response akin to Minnie Mouse—repeatedly—and my soul radiated.

Getting royally ruined at Palenque

Making camp as close to the ruins of Palenque as we could get took us to the Maya Bell Trailer Park inside the park, located in the northwest of the Maya lowlands. At tent-inexpensive rates—half the cost of Anita’s front garden—we made full use of all the facilities including the pool, open-air restaurant, spotless showers and a two-in-one hook up to power and water beneath a low stone table. That’ll do us. Sorry Anita, but you can’t keep attributing the occurrence of 911 in giving rise to eternal bad business. Get your shindig in order, sweety. 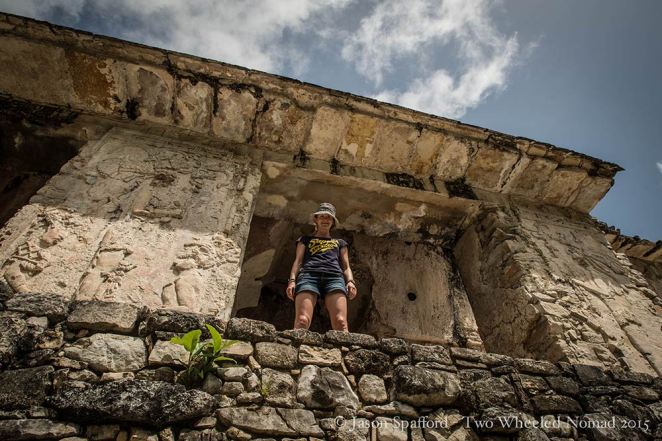 Lording it over the ruins at Palenque

Leave me here, Jase I’m too hot to move! 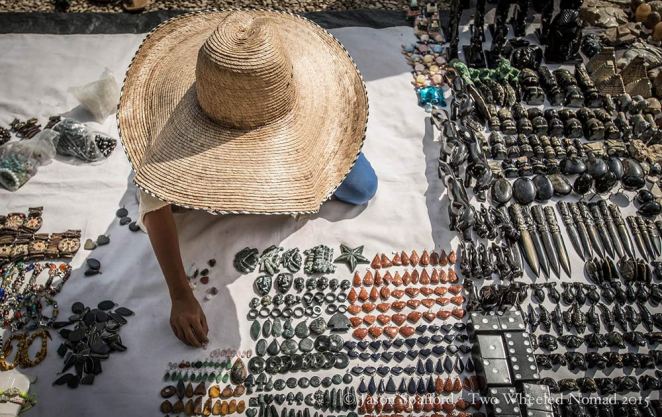 Sombrero’ed vendor at Palenque meticulously laying out her wares

This is what inside a fairy tale looks like, only at Palenque

Originally named Lakamha meaning “the place of the great waters”, Palenque is yet another notable Mayan site of the Classic Period—between 250 to 900 AD. Noted for the quality of its architectural and sculptural works in all of Mesoamerica, in addition to the numerous and well preserved glyphic inscriptions that have provided priceless insight into comprehending the history of this culture, as well as unravelling its religious, civil, ceremonial and art and craft connotations. The pilasters on the buildings were of particular interest, some of which presented Palenque’s rulers as gods celebrating different rituals. One portrayed a nobleman as incarnations of the god Chaak, decapitating its victims, one was dressed as the Corn god and another held a serpent dancing with a woman wearing a huipil (a richly embroidered cotton blouse) and skirt.

Exquisite detail restored in the carvings at Palenque

Exploring all the nooks and crannies at Palenque

Between 100 to 150 BC, humble beginnings saw Palenque start as a small farming village home to a few inhabitants but a century later, the oldest stone buildings had long been constructed and established. It became the capital—the power centre of an influential dynasty that ruled extensive regions known as B’aakal or “bone” of what are today the states of Chiapas and Tabasco.   The stunning structures as seen from the nucleus of the city were built during the Late Classic Period (600 to 900 AD), the golden era of the site, taking full advantage of the space created by the old stone constructions. Dedicating the morning to meander around the once commanding city of grandeur, and to unpick some of its history behind the remains was ample in satiating our appetites for Mayan leftovers.

Beyond desperate to take his skin off, I agreed with Jase that it was time to head for the highlands; cue the sanity restoring city of San Cristóbal de las Casas. Having left the roads that neither kinked nor curved on the Yucatán Peninsula, we eventually wended our way up into the mountains contouring around skinny pines, giving way to fuller-figured conifers. “Guess what the temperature is, Lise,” Jase came in over the helmet intercom. In the next breath, he jumped in again, “Only 18 degrees!” “Shut the front door!” I gently mocked but agreed, “Niiiiiiice.”

Hanging out in the square of San Cristóbal

Having met Swiss Robin (without the family or son), on his F800GS between Palenque and San Cristóbal, he graciously informed us of the 380 or so ‘topes’ (speed humps) that we’d be lumping our wheels over—and for the majority of non-graduated bumps—sorely scraping Pearl’s underside against. If you’d have asked me about the value of getting a sump guard for Pearl’s engine two Christmases ago, I’d have said, “Huh, how excited can you get about a bash plate of stainless steel?” Fully appreciating that Pearl’s ground clearance is akin to a piece of paper, I’d since engorged myself on humble pie.

Loved watching this duo entertaining the crowds, not just the kids

Located in a highland valley of the southern state Chiapas and enveloped by pine forest, San Cristóbal could be Antigua’s twin sister. It’s got that same red-tiled-roof-cobblestone-streets-and-wrought-iron-balconies feel accompanied with that laid-back, feel good ambience. It’s also surrounded by tens of traditional Tzotzil and Tzeltal villages in the heart of one of the most deeply rooted indigenous areas in Mexico. It errs blissfully on countryside over city, and is home to locals with liquorice black hair shimmering down their backs in long plaited ropes—scores of whom are often clad in bright traditional dress. It’s where ancient customs coexist with the modern amenities for us tourists and travellers.

We’d used Rossco Backpackers Hostel as a base, which promptly made our Hostel’s Hall of Fame, it has to be said. Owned by Canadian Rossco, he insists that all motorcyclists have their first night free of charge! Yowsers, that’s generous. All the usual suspects are in play: secure parking in the forecourt, all-you-can-eat breakfast, sparkling bathrooms and decent Wi-Fi. Moreover, there are a host of USPs included on top: ask to sleep in the attic on the pretty roof terrace where the bedrooms boast low rustic beams. They surround a cosy space for either dozing in the day or watching movies on a big screen, from the ultimate comfort of low-swinging hammocks and bean bags. 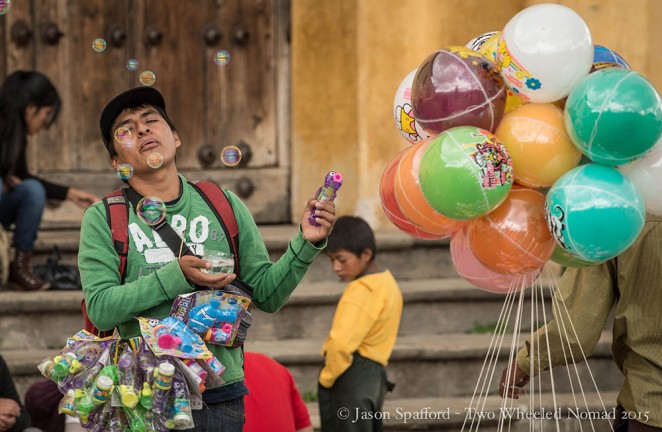 You’ve captured the moment on this one, Jase!

At altitude, San Cristóbal boasts bright days beneath Crayola blue skies. First thing and early evening start and grow sublimely cool, permit a refreshing breeze and even donning a base layer for a little warmth. It felt like the rarest of days in Mexico, the kind of mythical place I’d been dreaming about for so long but each day came to doubt the true existence of—finally-don’t-need-six-showers-and-sunscreen-factor-Albino sunny days. The outside air, which began in the mid-teens soon worked up to the mid to late twenties, launching into the low thirties by midday and boomeranging back down by dusk, no longer holding any trace of the hot day by evening fall. Jason now believes in a Mexican heaven. 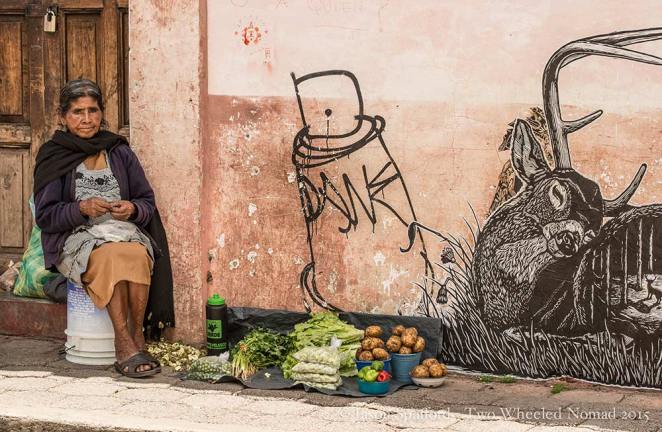 Instead, the air carried sounds of fireworks, people laughing and merriment flowing. Celebrating our 15th anniversary saw us dining at Viña de Bacco where the food tasted tremendous, the starters were ‘on the house’ and the Cabinet Malbec glided down like liquid nectar. I appreciated the moment, including the wine’s dizzying motion in the glass, its blood red colour, its intense flavours of grape, and the warmth I felt as it landed in my belly. The crisp night air spilled down from a midnight blue sky, which was punctured with backlit stars and a crescent moon that rode the sky. San Cristóbal had co-operated the entire time with postcard sunny days and perfect sleeping temperatures each night.