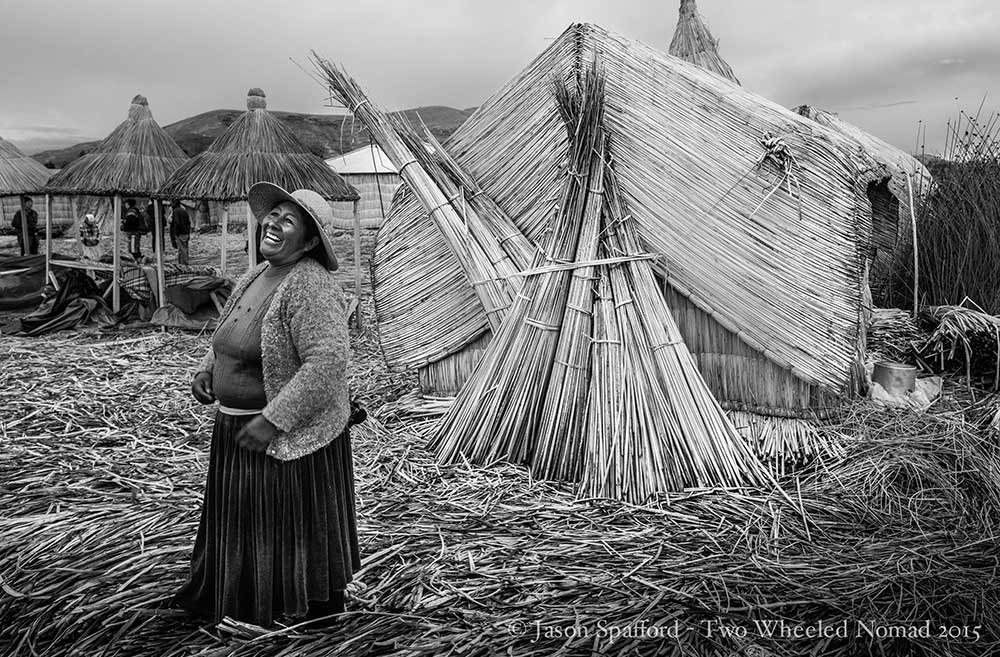 Leaving La Paz wasn’t the cruisey ride I’d pictured. To begin with, we had some heartfelt farewells and heartwarming moto-hugs to dispense. Oscar reluctantly let us go and sent us on our merry way into the bedlam of downtown La Paz. Getting out of the city meant getting well and truly stuck in it first. Busy with barminess, I hovered over and hit my horn like I was signaling Morse code: ‘Get-me-out-of-here!’ A veritable racket and tantamount to ten times the danger of Bolivia’s disreputable Death Road. Sandwiched between Toyota Town-Aces and Hi-Aces, my panniers scraped and scratched like nobody’s business. A fit of fury stuck halfway down my throat, like a sneeze that refused to come. Mind unraveling to become somewhat discombobulated, I gritted my teeth and remained undeterred, at least outwardly.

Two and a quarter hours we trawled through rush hour in air that was oppressive, thick and full of menace. “Che boludo!”, I may’ve mouthed when drivers in their moving metal boxes pressed in; a derogatory term relating to the perpetrator’s derrière. “Breathe in Pearl”, I urged, “The nutters are out!” as sweat matted my riding top and motorcycle trousers to my arms and legs. I fidgeted like a toad leg frying in hot oil. Intermittently crawling through the city’s sprawl at a snail’s pace in between going hell for leather surfaced my inner-anarchist. Pearl was screaming out for idiot-protection bars like a four-wheel drive needs ‘roo bars in Australia’s bush. It was maddening as it was toilsome, I might as well have been treading in a flood of biting ants.

Would I miss the futile sense of urgency from drivers? – pipping in frantic haste whose clanging disorder and toxic fumes billowed around us – feeling the mixture wrap around my face like a hot bandage. The mishmash of concentrated blockhouses, built to look like a bland, Lego city and climbing up the rocky mesas like poison ivy. Or the trash-lined roads patrolled by snarling dogs that raced alongside us like whipped curs. That is, until becoming burnt out and bungled by malevolent forces – its guts slithered out like wet eels, sliding from a slit sack. The answer is probably not, cities are not ordinarily my thing. Sometimes the happiness of one end of a city can soon sour at the other.  Jason was getting travel-weary of coursing through city after city; it was high time to leave them alone for a while.

Now that’s what you call an afternoon shadow.

Having finally escaped the brunt of La Paz’s stinging bite of traffic, an unforeseen reward for the morning’s calamity unfolded as we cruised towards Copacabana. Through a smog-blackened face, my eyes darted over rolling swells of green countryside on a stunning road. I smiled every mile past the traditional Aymará villages to the glacier-capped, brilliant white snowy peaks of the Cordillera Real. And then our eyes gravitated like magnets on the singularity of Lake Titicaca, its energy and sheer gravity drawing us in. Crystalline, gemlike water sparkled in a clear, Altiplano light. ‘Pretty special alright’, my radar registered.

No sooner had we kicked the side-stands down at San Pedro de Tiquina and the pair of us dived into the local catch. What felt like eating our head weight in fried white bait and trucha – trout, was a stomach-gratifying, taste sensation. That is, until the signal hit my brain I was more than full on fish. But what a welcomed interruption from meat.

Hopping across the water on a makeshift craft that resembled a rickety raft more than a sturdy boat was a rigmarole in itself, negotiating two heavy bikes aboard. The boat cleaved gently through turquoise waters until we spilled onto the shoreline. There we continued on ruta 2’s snaking ribbon of highway all the way to Copacabana – affording one of the best views of the vast expanse of blue. Biking bliss after the morning’s manic encounter with moronic drivers.

The world’s highest navigable body of water, Lake Titicaca is gar-gantuan. It goes on and on, way beyond the eye can see. A watery world without end. Set between Peru and Bolivia, the 8,400 square kilometre mass of shimmering freshwater is more akin to a sea than a lake. It’s no wonder history reveals how Inca legends and Andean beliefs came to credit Lake Titicaca with the birthplace of their civilization and the sun, connecting it to mystical events. There was a discernibly calm, soothing energy about the place.

Nestled between two hills and perched on the southern shore of the lake, Copacabana was a small, tourist-centric town, apparently still attracting international pilgrims who flock to its fiestas. We took flight after an overnight stay at Hostel Sonia having had our fill of Bolivia and pushed onto Peru.

Through Andean countryside dotted with villages, high-altitude hamlets and ruins all linked by ancient Inca culture, we sailed past terrace-lined foothills and mountainside. How had people once worked the land so industriously, so uniformly in linear lines – so high up? With women wearing petticoats and moccasins made from used tyres, still working the land by hand, it felt Peruvian all at once, rich in its Inca heritage.

A local Uros islander on the floating reeds

Just 7 kilometres east of our accommodation, Hostel Uros in Puno, we took ourselves off to see some floating islands. Utterly unique because they’ve been constructed from nothing; created entirely with the buoyant totora reeds that grow abundantly in the shallows of Lake Titicaca. The lives of the Aymará speaking Uros islanders are intertwined with the reeds. Edible in part, they also build their homes, transport, arts and whimsical crafts from the versatile material. Walking on the island was as soft and springy as a freshly baked cake. Their unusual floating existence roots back to an effort to avoid and isolate themselves from the aggressive Collas and Incas tribes. A peaceful people.

I was greeted by five families, all of whom displayed boundless personality. Although in tune with a tourist-ready set up, a set of folkloric songs were sung in dulcet tones of Aymará as well as a distant version of English. In such a contemporary age, I enjoyed seeing this time-honoured way of living for myself. Even if I did get further collared to pay for an obligatory reed-boat ride, powered by an engine attached to an adjoining smaller boat, and encouraged to buy handmade goods I was neither inclined to purchase nor wanted to carry on my motorcycle. These good folks needed to stay afloat like anyone else.

One of Cusco’s narrow streets tucked away in this love-to-get-lost labyrinth of a city.

Cusco told me in ten minutes it would rank my favourite South American city to date. Rough-hewn cobble stoned, steep narrow streets, lined by meticulously crafted masonry and a bright, feel-safe city ambiance pervaded throughout. It was a superb collision of chaotic and modern with slow and traditional. Estrellita Hostel was an ideal spot for the bikes and us, closely located to the heart of the old-fashioned city. I cared little and less that the place was packed with massage hawkers, a glut of tourist ware-touting locals hunting you like prey amid a minefield of Machupicchu tour operators, the place was throbbing with life. The fare was excellent, especially the fresh cuisine at Jack’s Café and Korma Sutra. It was ‘vista fantastic’ with no shortage of intriguing vantage points. I could’ve sat people watching all day.

A colourful and rather talented musician playing his hypnotic panpipe tunes 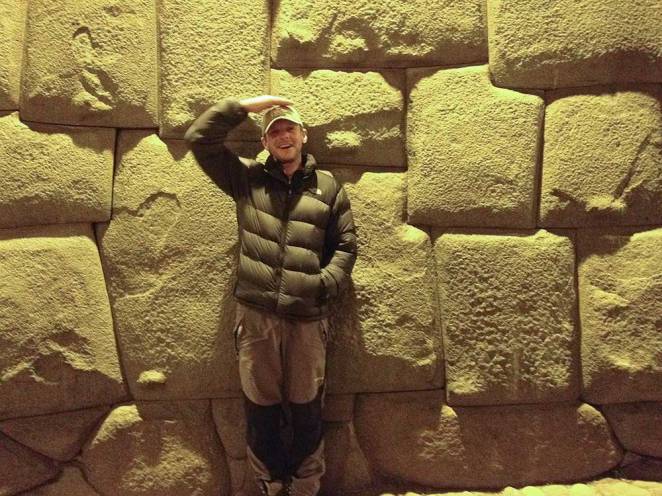 Meticulous masonry on the walls of Cusco, you couldn’t insert a piece of paper in between those stones.

Fiestas occur at frequent intervals in Cusco and one night we meandered through a firework-lit celebration in honour of the church. Live festival-inspired music permeated our ears as I squeezed my way in between the carnival market vendors offering supersized pale corn-on-the-cob with cheese alongside chicha morada, which is a sweet Peruvian beverage made from purple corn, roasted guinea pig or alpaca. I soon became an inveterate fan to the cactus flower fruit, which was fuchsia pink and finger-licking good. In fact, Peru’s roads were full of the flowering fruits – bush food ripe for the picking and packed with a sweetened punch. It developed into the perfect roadside snack and our jam-sandwich breakfast substitute. People jostled past coming and going in the teeming streets; the place was alive with a street dancing atmosphere.

Courtesy of social media, we’d become acquainted with Andrew – a loquacious Brit with a passion for night skies, skippering boats and photography – who’d been living in Cusco for the last seven years. After three too many dark beers, we spotted a local singer being filmed half way up a scenic street. Jupiter’s moons were illuminating the sky and the singer’s crescent shape line of groupies were evidently enjoying the show. The situation fostered an odd behaviour. In the heat of a spontaneous second, I found myself shamelessly dancing with this cheesetastic grinning guy; perhaps not one of my classiest moments gatecrashing his gig! Still, the crowd eddied and purled around me, cheering with full encouragement exclaiming that I’d be sure to feature on Peruvian television. I haven’t the slightest inkling why doing that seemed a good idea at the time.

Having the meanest curry this side of South America with Andrew.

All walks of life can be found in Cusco, not just the holidaymakers, travellers, honorary locals and residents. A Peruvian woman, well into the winter of her days, sat kind of crouched over on the floor. In the middle of a busy backstreet. She may’ve fallen, dropped something or stooped to pick up something she’d found perhaps. “Are you alright lady? Can I help at all?”, I enquired in survival Spanish. Stumbling over the language I kept probing, like a tongue returning to an abscess. She looked at me a little strained and shook her head. I think I was walking on ground uninvited. Curious, I thought. Or not. I looked at a metre radius around the woman and the full force of recognition hit me. My quagmire was her irredeemable, sticky situation. This lady was patently and simply having a nice, big number two! I can’t speak with specificity about this lady’s choice of location but oh my, there’s a memory of Cusco that’ll never fade. 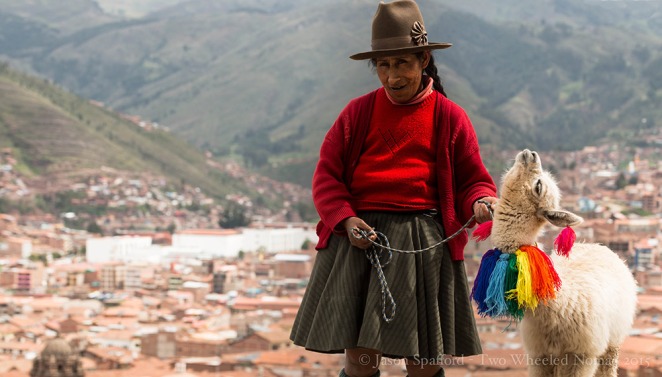 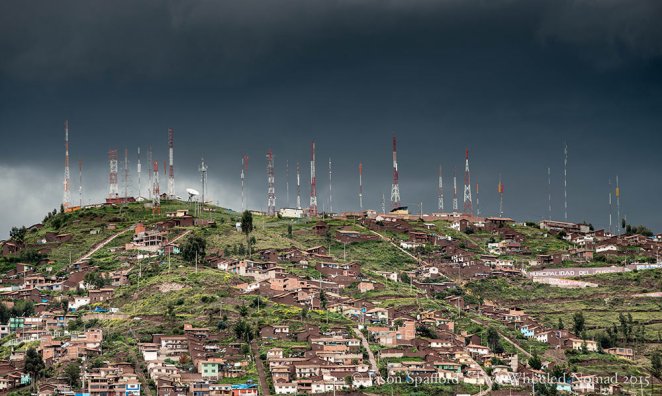 Dramatic skies over Cusco in the rainy season.