The air, leaden with its usual heavy humidity was also laced with thick vegetation and alive with the noisy chirps of crickets. As well as the deep bulging calls of howler monkeys, affording us a quick glance as they were beckoned into the black heart of the forest. It provided a melodic background to the faint purl of an ebb tide; its subdued waves gently stroking the sandy shore. Manuel Antonio usually tended toward a manic tourist spot throughout peak season, although we greeted it—a small oceanside village in the Pacific region—in the serenity of the off-season.

The glowing face of an orange sun slipped down over the western horizon, its brilliant shades of sunset kindling the heavens. Red ripples of light danced across the sea, they gleamed with a translucent fire in peoples’ hair. Moist sand squished between my toes as I strolled barefoot across the beach, grateful that the lightest of sea breezes tousled my hair about my shoulders. 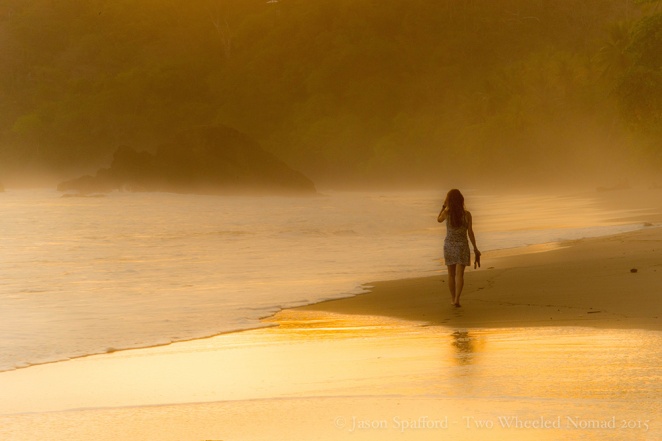 Beautiful marks on a coconut tree in Costa Rica

There’s nothing not to love about the inundation of rainforested hills sweeping down to the sea, gleaming like polished turquoise and the blissful beaches—to my mind—making Costa Rica worth every cent attached to her reputation. Home is where the motorcycle is and not having found any camping in this corner on the southwest, we kicked the side stands down at Beach Packer Hostel in Manuel Antonio, just down the road from Quepos. Whoa, the beach lay a hop, skip and a jump away from our bed; a spot renowned as the ‘Monaco of Costa Rica’ being so close to the wildlife-centric national park. The beach-relaxed owners of the lodging, Eurich and Nale made us exceptionally welcome with a discounted room and an evening of chilled beer and chatty banter to boot. Cheers, guys—good times.

For every weary traveller, there’s a lazy cat hogging a hammock

Having not yet overdosed on the tropics (good job, there’s much and more of that to come), it was sayonara to the Pacific in order to scoot across and caress the silky sands of the Caribbean. As a nice problem to have, we had a bit of clock to kill waiting for Touratech Costa Rica ship a rear shock over from Florida; a glorious outcome of Jason winning the 2016 Horizons Unlimited photography competition. Touratech HQ in Germany had willingly agreed to swop the prize of a super-suit for an equivalent value suspension system making someone and their two-wheeled Cadillac the happiest duo going on the west side. A radiant result and again, dankeschoen! Equally so, Marco—the manager of Touratech in San José liaising with Jason had been nothing but accommodating towards us, the bikes and our bellies—treating us to a pizza and cooled coconut juice was heaven sent. 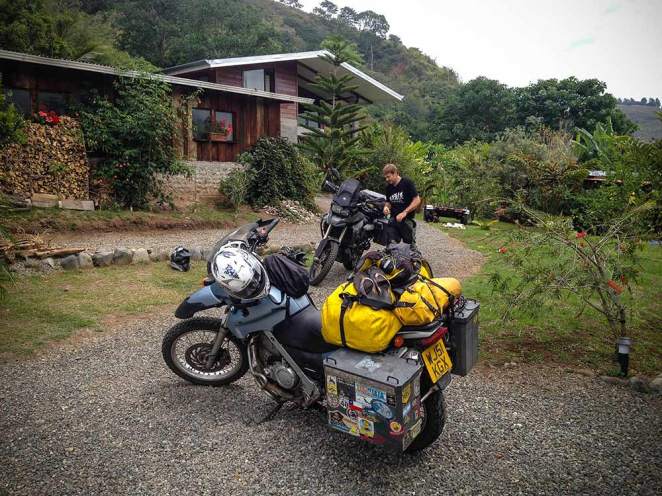 Camping in Orosi, near San José

Less than an hour’s ride and an overnight stop in Orosi took us to Turrialba volcano the following morning, in the Cartago Province. No one could blame us—we were bursting to see it post the recent seismic activity—resulting in the closing of San José airport having spewed ash, gas, mud and incredibly a little magna throughout the central valley. Since the last major eruption in 1866, it was a tad disappointing to get within 6 kilometres; the last leg being closed to the overly-curious.

A football pitch atop of the world

Nonetheless, the place was home to wild horses—tall, lean mares, some seventeen hands at least and the volcano was visible, covered mostly in dense primary vegetation looking out over around 4,000 acres of montane rainforest. Although a coolness had climbed onto the shoulders of the air—so heavy that I shivered in a cold rush—the ride to near the top was nonetheless smoldering; traversing up the trail saw the various lava flows indicative of the once flowing rivers of white hot magma oozing down. One I’m glad we meandered up to 3,000 metres and down again.

A day on a ribbon of highway wound us from atop the ethereal clouds down to Camping Maria in Playa Negra, situated 1.5 kilometres from Cahuita. Another campground whose untamed back yard was home to the beach. Pitching our tent just ten yards in fact from the roaring rumble of waves. Maria greeted us on arrival with a sunny nature and her smile was impeccably composed. This lady ran a tight ship alright. She was a planet in a perfectly elliptical orbit, with the campsite’s attentive volunteers gliding like moons behind her.

Yep, this place will do for the night

Waking up to the lavender glow of dawn, which haloed everything—the palms, the coral reef and the endless expanse of sea—pleasant thoughts spun dreamily through my mind. As the sun climbed slowly over the eastern horizon, each of the rocks on the shore lit up, their crevices filled with golden sunshine. The ivory coloured shells that had washed ashore gleamed with intensity against the black rocks. Pelicans hunted the water, soaring and skimming over the whitecaps with their wings tucked. 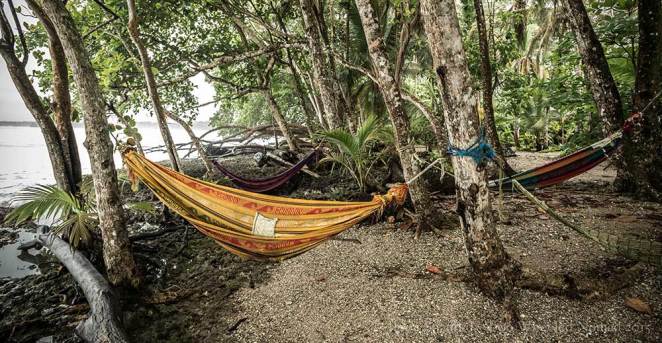 King of the swingers

It was a day to stretch out on the shell-laden sand under the spreading fronds of a palm, listen to some local music on a tinny transistor radio and let the world take care of itself. I could scarcely believe where I was. A patch of cherry red flowers bobbed their bright heads and black eyes at me; its beauty and symmetry reached straight to the depths of my soul. 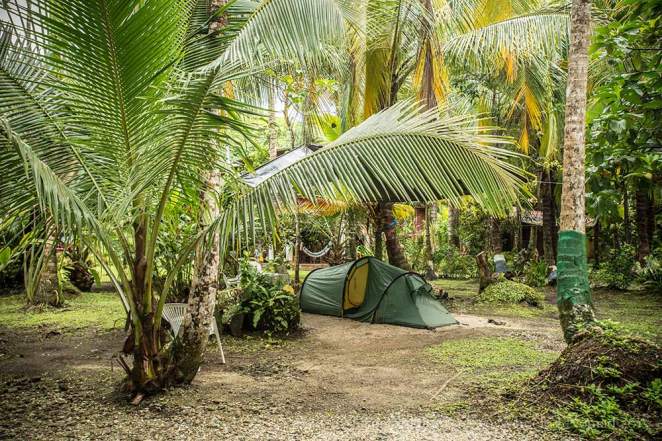 In silver-edged darkness, night soon draped the land. Tatters of cloud, black and opaque, coasted through the purple sky along the horizon. The irregular rents in the clouds picked up the starlight and gleamed with a gossamer fire like pale, silver eyes in the blackness, looking down on our home for the night. The ocean trembled turbulently. Lightning leaped through clouds against a dramatic indigo sky as I paused to listen to the sound of crystalline rain tinging off Maria’s patio roof.

The watery wild off Maria’s campground

Dark grey swells rolled in, one after another, thunderous as they curled and crashed, shattering on the beach. The hair on the nape of my neck started to prickle. Water rushed in white and boiling, almost up to the place where we’d made camp. No fury summoned from Seven Hells could have brought more tumult and fury in the instants that followed. Mother Nature was peeved about something as she ripped the sky asunder in a sonorous rage. Upholding a saturnine glower, she held sway for as long as time itself—the sound as sharp as a knife in the closeness of the tent. A spellbinding show.

When it rains, it pours in Costa Rica

The rain was a continuous drumming and its runoff beat a staccato as it spattered into pools of water on the ground. It took all night for the waves to exhaust themselves, melting back into the body of Pachamama once more. Eventually, whispering gently, rhythmically, against the shore. A stinging wash of desire emerged, born out of a morbid curiosity or perhaps the stifling heat and it took all I had not to run in with childlike abandon and make for the waves. Condensed as the waves were compared to their nighttime appearance—didn’t remove much of the lethal undertow nor the skull-smashing rocks that lay beneath—a watery world of silken menace in which I’d rather not come face-to-face. Still, as a water-soul, I’d run out of lifetime before I’d stop marvelling at the sea’s intense and enigmatic beauty.

You can dampen the bike but not my spirit..!

“Oooh, I can’t see him. Where is he?” I asked Rich and Ash (a good time, media savvy and cute-as-a-button Canadian couple who are ‘Desk to Glory‘) as my eyes narrowed, searching for any imperceptible movement of the sloth. I saw only a pequeño of fur atop a tree in the camouflaging foliage. Still, on the coastal trail in Cahuita we spied a woodpecker doing his ‘ting on an ancient tree trunk, and got up close and personal with a green basilisk lizard. He looked straight at me, sizing me up in an instant. Why does it feel that it’s only through the eyes of animals that we see ourselves correctly…as we really are. Is it because animals can see a person’s soul, unlike humans, who often see only the body.

Fin, one of Maria’s volunteers—keeping everybody happy

Boats waking up to a new dawn, Manuel Antonio near Quepos